In 1674 Samuel Pepys, MP and Secretary of the Admiralty convinced King Charles II to begin the building of 30 ships to improve the performance of the Royal Navy against the strengthening Dutch and French fleets.

Three of these warships were to end their days on the same night on the Goodwin Sands, one of which was the Stirling Castle.

This wonderful painting of the Lenox was painted by British naval historian and maritime artist Richard Endsor.  The Lenox and the Stirling Castle were built to the same plans at Deptford by master shipwright John Shish.  The only difference between the two ships is that the Stirling Castle had an extra gunport added on the upper deck – according to Richard, only an anorak expert would know this!

The launch of both ships in 1679 was attended by King Charles II, after which the flagpoles were placed by masts.  The Stirling Castle was one of 20 third-rate ships of the line –  meaning that she carried 70 cannons.  At 151 feet long and 40 feet wide, she had three masts that could carry nearly 1,300 m2 of canvas.

Her figurehead was a lion rampant.  Her normal complement of 440 crew and officers would have lived in pretty cramped conditions, although at the time of her sinking only 275 men were on board.

John Johnson was her Captain when Britain declared war on France in May 1702 and she was despatched to Cape Finisterre as part of Sir Cloudsley Shovell’s Mediterranean fleet.  Following her return to England, the Stirling Castle was once again sent south, this time escorting merchant ships to Portugal, from where she returned in the early autumn of 1703. 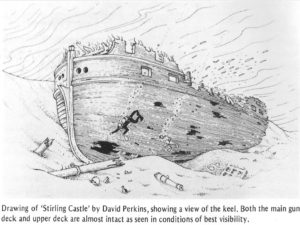 On Saturday 27th November 1703, she was at anchor in The Downs with over 200 other ships, taking shelter from the Great Storm that had been battering the south coast of England for several days. Tragically, like over 100 other ships in The Downs that night, the Stirling Castle did not survive.  Of 275 men on board, only a quarter were rescued.

In 1979, following reports from local fishermen of nets snagging on an obstruction on the seabed, recreational divers discovered the wreck of this magnificent warship.  Investigations revealed the practically intact hull of a ship later identified as the Stirling Castle.

Her excellent condition was attributed to the fact that, rather than being hurled onto the Sands and broken up into many pieces, she had simply been overwhelmed by the huge waves and sank.

This ties in with accounts that a number of sailors were rescued from her poop deck, including one Thomas Atkins who had taken refuge on her from another sinking warship, HMSMary.  The enveloping sand completed her state of preservation.

Diving investigations took place in 1980 and again in 1999.  About 300 artefacts were retrieved including a ship’s bell, pewter plates, onion (wine) bottles, a copper galley kettle, navigations instruments and the most prised of all, a Rupertino gun complete with carriage and truck wheels attached.  Macabre finds included a leather tunic with rib cage and a gilded candlestick with a skeletal finger attached by wax.   One of our Trustees recalls being handed this on the dive boat as it was brought up from the seabed.   These artefacts are now displayed at various museums around the country.

Evidence of the Stirling Castle’s recent return from Portugal was seen in the discovery of a well-preserved basket full of what looked like dried raisins on the vine and which were assumed to be grapes.   These grapes were included on the ship’s surgeon as ‘necessities’ – though necessities for what are unclear.  The identity of the ship was eventually confirmed by the Board of Ordnance number stamped on the brass cannon.

One of the divers later told of the privilege he felt at being able to walk on the deck of one of Pepys’ warships and swim through its gunports.

The Stirling Castle is of historical and cultural significance because she was one of the first warships to be fitted with a wheel rather than a tiller, pinpointing the transition in steering mechanisms for warships that continues to this day.  The many artefacts retrieved from her decks give a valuable insight into the lives of sailors in England’s 18th century Royal Navy.

Passionate pleas to the maritime archaeology community for a rescue package were made as the Stirling Castle was the most intact example of a rare 17th century warship ever found.  Unfortunately, at the same time, the interest of the nation and all available funds were focussed on the recovery of the Mary Rose from the Solent.

The Stirling Castle remained uncovered by the protective sands that had conserved her for nearly three decades until 2017, when she was enveloped once more.  It is thought her uncovering was due to dynamic sand movement following extensive marine aggregate dredging that took place on the Goodwin Sands between 1976 and 1999.   Exposure to the abrasive action of the tides and currents that swirl around the Goodwins inevitably wrought havoc on the shipwreck and by 2017 all that was left was a ‘wreck mound’.

In 2008, Historic England drew up a Conservation Statement and Management Plan that concluded that the site was highly unstable and in a state of degradation.  Several recommendations were made including the development of appropriate visitor access to the wreck, to encourage local support and provide interpretative material for a public display about the wreck at Deal Castle.

Stabilisation now depends upon her remaining covered by sand, as renewed exposure to the processes of sand movement around the wreck will result in rapid deterioration of the both the wreck and its contents.

The site is dived annually by her licencee and a report of her condition is submitted to Historic England.  Pre Covid-19 the Trust had been in discussion with Historic England about taking the opportunity of doing   a multi-beam survey of her at the same time as the planned 2020 surveys of her sister ship the Northumberland, which sank on the same terrible night.  It is hoped that maybe in 2021 this could again become a possibility.

Historic England has recently funded a fascinating Virtual Dive Trail of the Stirling Castle showing the current state of her wreck mound and the location of the artefacts that have been found so far.

Artefacts recovered from the Stirling Castle