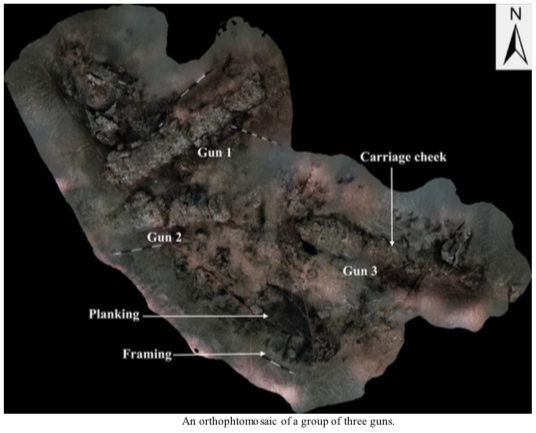 HMS Northumberland is one of four Royal Navy warships that sank on the Goodwins in the Great Storm of November 1703 and is one of three wrecks on Historic England’s Heritage At Risk (HAR) register.  The other two wrecks are HMS Stirling Castle, which sank on the same night as Northumberland and HMS London, that explodedin the River Thames in 1655 and is the subject of an ambitious recovery project by the Nautical Archaeology Society.

Fieldwork carried out on the Northumberland in August 2018 by a collaborative team of Pascoe Archaeology and MSDS Marine with divers from MSDS Marine, Bournemouth University and Sea Dive Organisation led to exciting new archaeological features being identified.

The discoveries include an assemblage of concreted swords, a group of pulley sheaves and one the ship’s Culverin chase guns with parts of the gun carriage attached.

The progress of the field work was documented by cameraman and produce Michael Pitts and each day a new episode of Northumberland Diaries was published to engage with anyone interested in the work. You can see these diaries here.

The site is currenlty covered with all types of fishing gear ranging from heavy duty trawl net, lobster pots and floating gill net.  The latter is very hazardous as it is made from extremely fine nylon mesh which is floating about 0.5m above the seabed and therefore posing an entanglement hazard to divers.

Pascoe Archaeology has received a grant from Historic England to carry out further investigative work on the site.  This was meant to take place in March / April but will obviously have to be postponed.  However, it is hoped that the geophysical surveys and diving will still be able to go ahead sometime this summer.

We will keep you updated.