How were the Sands created? 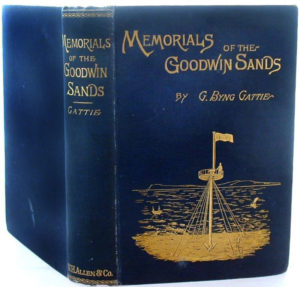 Many books have been written about the history of the Goodwins and a list of these can be found in our Research Library.  If you know of a book that should be included in this list, please do let us know.

The Goodwins comprise two large sandbanks lying 4 miles off the East Kent coast stretching for 10 miles from Ramsgate to St Margaret’s Bay and varying in width from 1 – 2 miles.

The two sandbanks are known as North and South Calliper on account of the claw-like shapeof the area of sand that appears at low tide.

No one knows for sure how the Goodwins were created.  Some say they are the result of a silt build up from the River Stour as it exits into the English Channel at Pegwell Bay.

The most popular theory (and the one we like) is that they were once an island called ‘Lomea’ or ‘Low Island’.  Julius Caesar mentions passing Lomea when invading England, an act commemorated by a stone plaque on the seafront at Walmer, right opposite the Goodwin Sands.

Lomea was thought to be one of three islands recorded during Roman times, the other two being Richborough and Thanet, both of which are now joined to the mainland.

Historians think that Lomea was flooded in 1099 leaving only a couple of long narrow sandbanks, which were subsequently named after Godwyn or Godwin Earl of Wessex.  Godwin was the father of King Harold II who was famously defeated by William the Conqueror at the Battle of Hastings.

Julius Caesar sailed passed the then island of Lomea in 55BC during his first attempt at invading England and again when he returned in 45BC.

In 1776 Captain Cook moored in The Downs on Endeavour on his return trip from discovering Australia.

During 1801-2 Admiral Lord Nelson often visited his fleet anchoring in The Downs whilst they were preparing for battle against the French.  His body was later returned embalmed in French brandy on his ship Victory after being killed at the Battle of Trafalgar in December 1805.