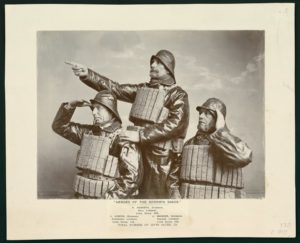 The Deal boatmen were renowned for their bravery but there was fierce rivalry between the boatmen operating on the four beaches between Deal North End and Kingsdown.  They all ferried supplies to the many ships waiting in The Downs (victualling) and often negotiated their own business deals between these ships and the shore.

They also sold anchors and cables that they had scraped up off the seabed with grappling irons, an occupation, which was known as ‘hovelling’.

As well as victualing, hovelling and fishing, the boatmen often took part in smuggling to augment their meagre income; their shallow drafted luggers being ideal for slipping over the Goodwin Sands to evade the Customs men.

Their reputation as Heroes or Villains is discussed in this article by Dr Jacqueline Bower. We rather like this anonymous quote published in the Times newspaper in 1866:

Lifeboat stories from a local historian

As a paramedic and volunteer on the Walmer lifeboat, Colin Varrall also has a natural interest in the history of Deal and the lifeboats that serve the East Kent coast.  Colin has written several stories about the characters and rescues from the past for the local newspaper, the East Kent Mercury and he has kindly agreed to share them here.

Prior to the establishment of the Royal National Lifeboat Institution in 1824, the Deal boatmen saved many lives, rescuing sailors from the hundreds of ships that foundered on the Sands.  They earned themselves a mixed reputation – venturing out in the most atrocious weather in their luggers they carried out many acts of incredible bravery.  On the other hand, however, it was said that sometimes they would not help a stricken ship until salvage terms were agreed.

Initially, there was much rivalry between the new RNLI and the Deal boatmen, as the boatmen feared they would lose business.  It took nearly fifty years for friendly relations to be established.    The toll of shipwrecks on the Goodwin Sands was so high that in the early part of the 19th century there were four lifeboat stations on the beaches between Deal North End and KIngsdown (usually located opposite a pub) and eight along the stretch of coast between Dover and Margate.

The location of each of these stations made it possible for at least one of the lifeboats to reach any part of the Goodwin Sands irrespective of the direction of the wind and tide.

Many books have been written about the Deal boatmen, which can be found in our library

Since the establishment of the the RNLI in 1824 over 142,700 lives have been saved by 431 lifeboats operating out of 238 stations around the UK (2020 figures).  Three of these stations – Dover, Ramsgate and Walmer protect the waters around the Goodwin Sands with a combination of four different lifeboats.  Dover’s Severn class and Ramsgate’s Trent class are both sturdy all-weather lifeboats each with a range of 250 nautical miles.

Walmer lifeboat station provides more inshore cover with a B class Atlantic 85 and smaller D class both being launched off the beach.

Between them, these three stations have received over 100 awards for gallantry.