We are incredibly lucky to have several local historians with extensive knowledge of the Goodwin Sands.  One of them is David Chamberlain who has written several books – see our library – and who has kindly shared some of his short stories with us.  Enjoy!

Why were so many ships wrecked on the Goodwin Sands?

Lying enroute between London, the North Sea and the Atlantic Ocean, the Goodwin Sands lie in one of the busiest shipping lanes in the world and posing a serious threat to shipping.  The lack of navigational aids in the early days of sail contributed to the toll of shipwrecks as ironically, did the presence of the calm anchorage called The Downs that is created by the presence of the treacherous sandbanks.

The first markers warning mariners of the imminent threat from the Sands were the North and South Foreland lighthouses situated just north of Broadstairs and at St Margaret’s Bay respectively.  The first North Foreland light was mentioned in 1499 and consisted of a simple structure of a wooden pole with a basket at the top in which a fire was lit.  In 1634 two lighthouses were placed at South Foreland to create a transit light enabling ships to steer well clear of the Sands.

The first chart was drawn up in 1583 by Dutchman Lucas Janszoon Wagenaer but attempts at erecting warning beacons did not take place until 1840.

Captain (later Admiral) Fredrick Bullock RN proposed the installation of a mast with two safety galleries and a supply of fresh food!  This warning beacon remained in place for two years until a Dutch ship ran it down.  A second beacon was swiftly erected but this was swept away in a storm in 1847 and was never replaced. 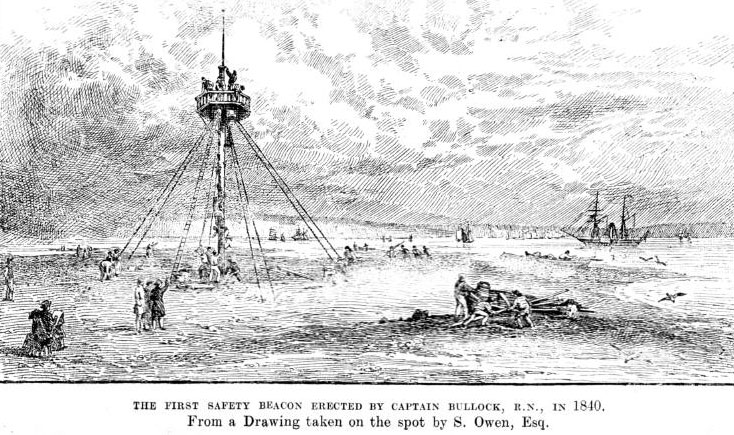 It was not until 1795 that the first lightship was positioned on the eastern edge of the Goodwins and an East Goodwin lightvessel still remains in place today.  On clear days it can just be seen on the horizon from the shore.

The Sands have proved a dangerous place even for the lightvessels; eight were lost between 1895 and 1961.  In 1954 the South Goodwin lightship sank in a fierce storm with the loss of all of its seven crew.  Only one person, a visitor from the Ministry of Agriculture monitoring migrating birds, was rescued.

Improved charts and the invention of GPS has reduced the incidence of tragedies occurring on the Sands to zero, although in 2018 the Walmer RNLI were called out to rescue a yacht that had run aground.  The surprised yachtsmen apparently told the lifeboat crew they didn’t know the Goodwins were there!

What lies beneath the waves?

Although the Goodwin Sands create the safe anchorage of The Downs, they have alsp posed a threat to mariners earning themselves the nickname ‘the shippe swallower’ in the process.

The glutinous, quicksand nature of the Goodwins ensured that any ship foundering on the Sands would soon ‘swaddle down’ to a watery grave, often first breaking its back before disappearing beneath the sand.

In a report written in 2015 for Historic England, Wessex Archaeology described the Goodwin Sands as ‘archaeologically extraordinary’ on account of them ‘holding the highest density of heritage assets in UK waters with all these wrecks having the reputation of being abnormally well preserved’.

The first recorded wrecking was in 1298 when ship owner William Martyn appealed to King Edward I to appoint a jury to investigate a claim of plunder near Sandwich.

Since then, over 2,000 shipwrecks have been recorded with the true number, according to Richard Larn OBE, probably reaching nearer 3,500.

Hundreds of sailors and scores of WWII airmen have died on the perilous Sands and some say as many have 50,000 souls have drowned there.

The most recent tragedy to occur on the Goodwin Sands was the loss of the South Goodwins light vessel during a violent storm in November 1954.  During the night of 27th November one of the heaviest storms in two centuries blew up and the South Goodwin light vessel lost her anchors.  She was driven nearly six miles north where she eventually came to rest near the North Goodwin sandbank.

Her seven crew members all died and their bodies have never been found.  Only one survivor was rescued by a US Navy helicopter;  Ronald Murton, a 22 year old employee of the British Ministry of Agriculture who was on board monitoring bird migration, was rescued after eight hours of clinging to the rigging.

The crew who were lost were named as Thomas Skipp, Master from Coggleshall in Essex, Kenneth Lanham from Bow in East London, Sidney Philpott from Ramsgate in Kent, Walter Viney from Plaistow in East London, George Cox from Gorlestone in Norfolk, Thomas Porter from Holbrook in Suffolk and Henry Lynn from Dovercourt in Essex.

Further information and documents about the tragedy can be found on our Research page.

Ironically, it was the safe anchorage of The Downs that often led to the loss of many ships as they dragged their anchors onto the Sands during bad weather.  One such instance was the Great Storm of 27th November 1703 when, it is said, 130 ships and 1,200 sailors were lost in one single night.

During the Great Storm, four warships of the Royal Navy, HMS Northumberland, Mary, Restoration and Stirling Castle all met their end with the loss of the majority of their crews.  These four warships are all now listed as Protected Wrecks.

The Rooswijk and the Northumberland are two of the three British shipwrecks on Historic England;s Heritage At Risk Register.  The third is HMS London which lies in the River Thames and is currently undergoing conservation work by the Nautical Archaeology Society.

Many other famous ships have met their fate on the Goodwin Sands – too many to mention here but further details can be found in the books listed in our Research Library.

It is surprising today to think that Sandwich was once an important port with an enormous harbour that could accommodate a vast fleet.

Two notable naval battles that took place in the area were the Battle of Sandwich in 1457 against the French and the Battle of the Downs in 1639, which was in fact fought between the Dutch and the Spanish with the English trying to remain neutral.  Read English Heritage’s report on the battle.