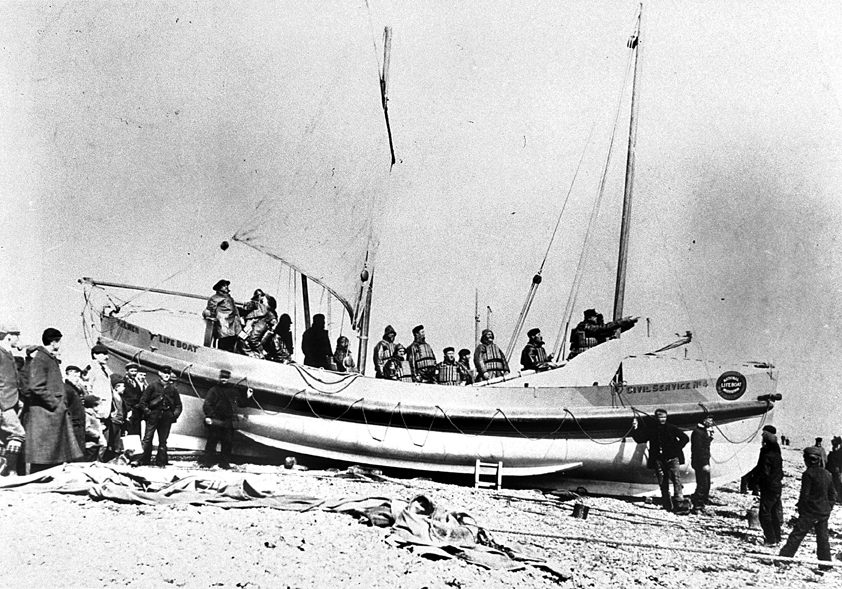 It is not very well known that in 1906 the crew of Walmer lifeboat went on strike following what was considered to be their difference of opinion with the Central and Local Committee’s of the Royal National Lifeboat Institution, in regards to the Walmer lifeboat being launched to an incident the previous April. The Walmer lifeboat “Civil Service No.4” had been launched with the report of distress rockets being seen fired by all four of the Goodwin Sands light vessels at 2.30 a.m.

As a result, the friction between the two authorities had culminated in the refusal of the Walmer lifeboatmen to man the lifeboat. A public enquiry was held on New Year’s Eve in 1906, at Deal Town Hall to investigate the incident, presided by Lord George Hamilton, Captain Action Blake of Trinity House as the nautical assessor, along with the Institution’s chief inspector and Captain Foote, the lifeboat inspector for East Kent.

Coxswain Harry Parker had described the conditions of the service in which he had participated, explaining that it was not an uncommon event for several vessels to go aground onto the Goodwin Sands at the same time and had therefore assumed this to be the case on this particular night in question. He confirmed that Walmer lifeboat had been the first afloat and also the first to reach the East Goodwin area, which was substantiated by telephone messages recorded on the official report sheets. The conditions were bad and very dark with a thick haze, which caused Coxswain Parker to exercise his own discretion in launching the lifeboat, eventually finding a vessel that had been in collision with the East Goodwin light vessel.

One highlighted problem was that the Walmer lifeboat was stationed between two others and all only three miles apart. It was also the general opinion that no lifeboat should ever go out to the Goodwin Sands alone, since they often required assistance themselves and he proceeded to prove his point by quoting several recent examples.

On the return of the Walmer lifeboat, the local secretary, Reverend Stanley Treanor, had recommended the crew be paid for the launch, but a rejection was made by the London Central Committee on grounds that the Walmer lifeboat should not have been launched. The Walmer crew having heard this comment therefore refused to ’go in the boat again’ until their claim had been met and the ‘weather rule’ was done away with. The local boatmen who had constituted the crew continued to attend wrecks in the area, but would use their own craft and had been out several times that month already. The root of the trouble was the ‘weather rule’ and the fact that there were too many lifeboats on such a short stretch of coast. The rule stated that “in really bad weather the action of the Goodwin’s lifeboats will not be scrutinised too closely, but as a rule only the weather boat is to be launched’.

Captain Nepean stated that the rule was necessary to prevent lifeboats being launched in flat calm weather, when ‘even a Serpentine skiff could go afloat with safety’. At present the Goodwin lifeboats were going out to anything and anywhere, with the service being brought to ridicule as a result. A local pilot who had actually been shipwrecked four times himself, reminded the assembly that there during an incident involving 200 persons aboard a vessel only twelve months earlier, the Coxswain of the lifeboat had also not been paid. A further question that was met with a loud applause when he  commented ‘what use would one lifeboat have been then, had she broken up?’ The Central Committee had suggested that the unnecessary launches were only being made for the money.

Some evidence had also come to light when the official weather reports of the various light vessels and lifeboats were compared, showing a complete agreement between them, but the wind direction was heavily biased towards the locality of each respective lifeboat station. This resulted in the wording of the ‘weather rule’ being altered to read ‘In fine weather the boat in the more advantageous position having regard to the wind, tide and distance from the casualty is the only one to be launched‘. The decision was finally made and the decision accepted that the volunteer Walmer lifeboat crewmembers should all be paid. However, relations between the crews of the North Deal, Kingsdown and Walmer continued to be strained until one of the three Downs boats was subsequently withdrawn.