On Friday morning, October 31st, 1919, the ketch barge Corinthian set sail in a freshening north-east breeze. The vessel, along with the slightly smaller ketch Glenavon, had completed loading phosphates in the port of Antwerp and they were sailing together for the Thames and London. Captain Leek was happy that the 27 year old craft was not overloaded and the 160 tons of fertilizer did not impair her sea going qualities.

As the Corinthian left Antwerp, the captain and the mate discussed how they were going to share the four hour watches with his crew which comprised of a seaman and a ship’s boy.

When they began to clear the shoal waters of the Belgian coastline, the wind freshened to a blustery east-north-east. At midday the wind strengthened to gale force and a sudden gust carried away the mizzen sail. In the worsening weather, Ernest Leek decided to make a run for it, to shelter at Dover.

Before they passed the East Goodwin lightship, the main sheet, a three inch thick manila rope which controlled the main boom, parted. It was seven o’clock in the evening and with the mainsail blowing out of control the Corinthian became unmanageable. Leek knew he was drifting onto to the Goodwin Sands and was hastening to get a new cotton canvas mainsail ready to hoist when they hit the sandbank.

In an instant the mizzen mast was ripped out and toppled overboard, and the ketch started to take in water. Leek went below, gathered up bedding and a paraffin lamp. Then he hurried his crew aloft into the ratlines, which were attached to the main mast. As the seas swept her deck the Corinthian settled on to the Goodwins with only her mast showing above the raging sea.

After the captain had made sure that his crew were secure in the rigging, he set light to the blankets. His signal of distress was quickly observed by the vigilant men on the light vessels, who, at a quarter to ten, started to fire rockets and their signal gun to alert those ashore. 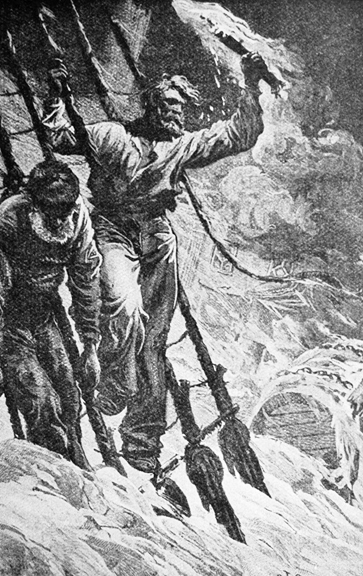 Leek waited in the rigging, occasionally shouting words of encouragement to his crew. The light vessels stopped firing after they had received a response from the shore – he assured his men that it would only be a matter of time before they would be saved. Little did he know that the lifeboat had been launched to another casualty in trouble on the Sands.

Eight long bitter hours they continued to suffer. The ship’s boy was in tears and no amounts of encouragement, which Leek shouted to him, helped. At six in the morning, the lad’s ordeal came to an end. With a pitiful scream, his hold was ripped from the ratlines and he plunged headlong into the wrath of the waves below – never to be seen again.

It was almost seven o’clock in the morning when the North Deal lifeboat, Charles Dibden, came ashore, in a flurry of spray. The coxswain William Adams was helped out of his craft, along with the two rescued seamen from the schooner Toogo. John Prior, the lifeboat secretary and agent for the Shipwrecked Mariners Society, informed the weary Adams that more wrecks had been sighted. Adams’s heart fell; however, he was in such pain, from the injury that he had sustained in the lifeboat, he knew he could not render further assistance. Prior reluctantly appealed to William Stanton, the reserve lifeboat coxswain, to re-launch the Charles Dibden and assist the casualties. 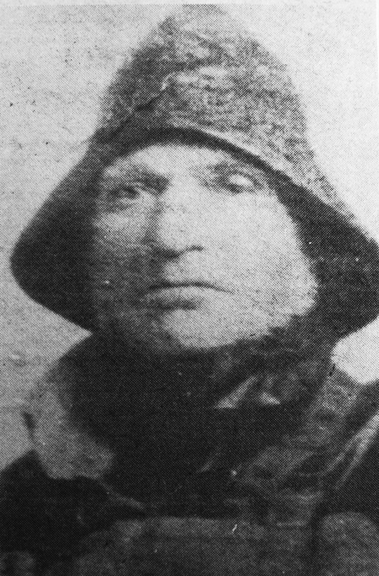 67 year old Stanton was gravely ill with throat cancer, and was awaiting entry into hospital for an operation. He did not falter in his reply and called out for fresh volunteers to take the life-belts of those injured or fatigued. At seven-thirty the boat ploughed back into the waves; it would be Stanton’s last ever lifeboat rescue. There was no let up in the weather, and to those ashore, with east-north-east wind sweeping up the beach, it seemed to be getting worse.

Meanwhile, with their hands numb with cold, Captain Leek helped secure the other two crewmen on to ratlines with rope from the rigging. The mate was barely conscious and was delirious with exhaustion. As the captain strained his bloodshot eyes over the horizon for deliverance, he came across the sad sight of the other ketch Glenavon, which was in a similar predicament to them, with all of crew hanging on to the rigging.

For now, the lifeboat was making heavy going beating into the wind. It was to take seven hours for them to cover the six and a half miles to reach the distant Corinthian.

By ten, that morning, Leek watched with horror, as the last of the crew of the Glenavon disappear from the wreck’s masts. There was little conversation amongst his hypothermic men, as their will to live was fading fast. While they clung to the fragile main mast, Leek still scanned the bleak spume filled sea for salvation. It eventually came in the vision of the Charles Dibden, rolling violently below them. Ernest Leek’s first concern was for his Mate, George Green. His condition was becoming critical and Leek urged him to tie the rope, which was thrown from the lifeboat, about himself. With what little strength the man had he laboriously looped the rope under his arms and secured it with a bowline knot. 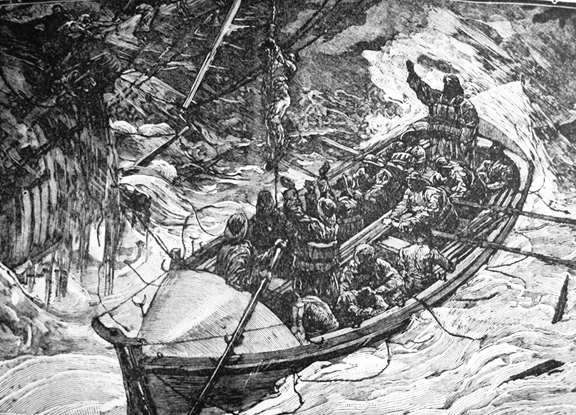 Green’s nerves were at breaking point. With what little courage he had left, he let go of the rope ladder that had supported him over the last 17 hours. As the lifeboat crew hauled the mate towards them, he came foul of a thick rope shroud which was bracing up the main mast. The unfortunate man’s mind finally snapped and he held on to the rope with all his remaining strength.

No matter how much the lifeboat crew pleaded with him to let go, he would not obey. Leek even risked his own life by climbing down to him and then tried to prise the poor man’s fingers apart from the rope. The man held on in a death grip, and with sadness the captain left him, as he died – with salvation mere yards away.

The AB and Leek were assisted onto the rolling Charles Dibden, and, after another 25 minutes of pulling, the battered dead body of the mate was hauled aboard. The ketch’s captain explained that the crew of the Glenavon had perished earlier and Coxswain Stanton decided to make for shore with all due haste.

On that dismal afternoon, at half past three, the lifeboat was winched up the beach. As the survivors of the Corinthian were ushered into the near-by public house, ‘The Forrester’, for dry clothes and a hot drink, Ernest Leek met the agent for Shipwrecked Mariners, John Prior. Little did he know that he would make Prior’s acquaintance again, four years later, when he would once more be rescued by the lifeboat. 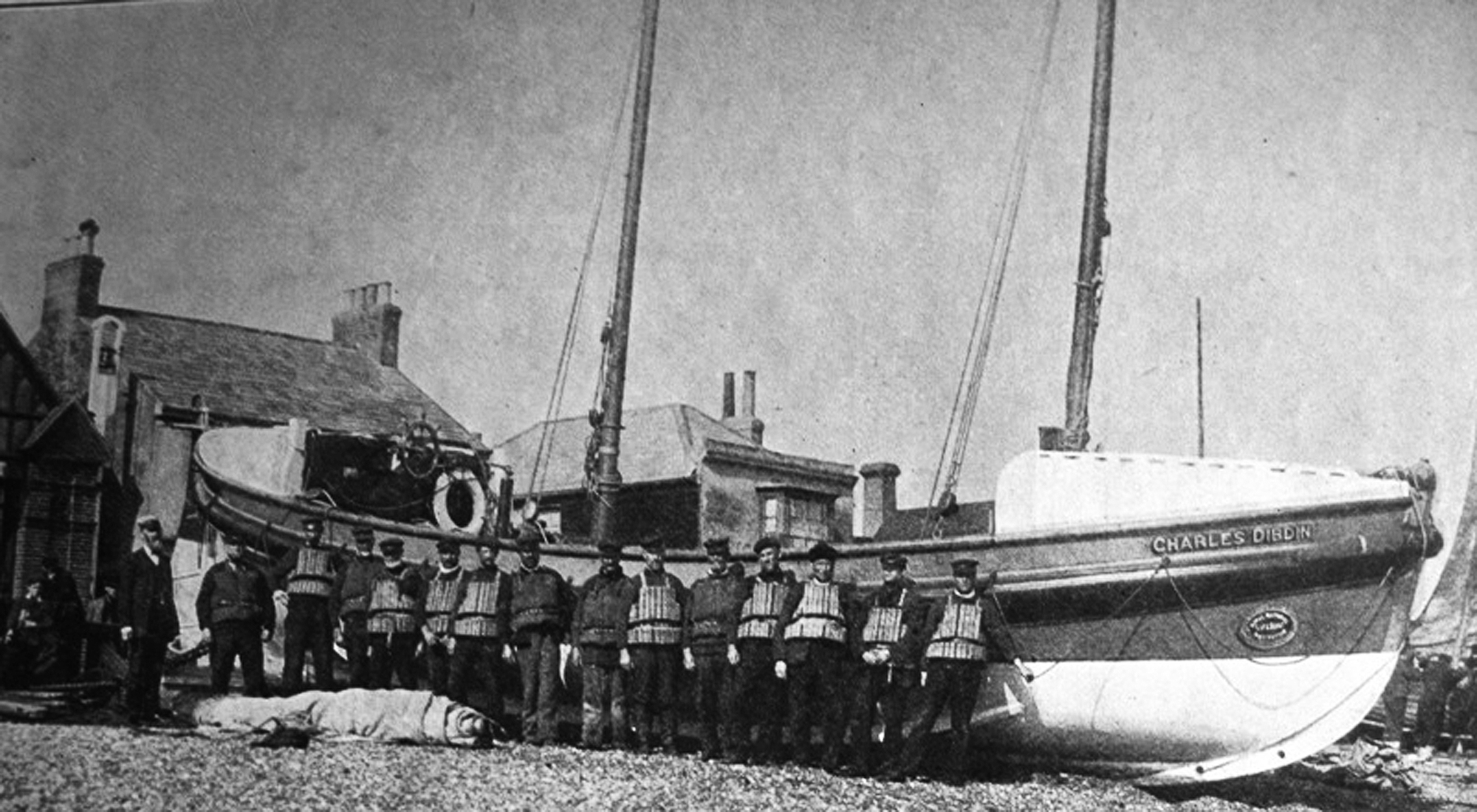