With a fresh south westerly wind blowing on the 22nd of November, 1703, a British naval fleet comprising of large first, second and third rate ships-of the-line limped into the Downs to anchor. Under the command of Admiral Sir Cloudesley Shovell, they had had an unsuccessful expedition to the Mediterranean with not finding their French enemy.

Since the engagement was ill planned and rushed so late in the year, the sailors aboard the vessels had endured hardships with lack of victuals and on short rations. Because of this all three of the hospital ships, that followed the fleet, were full of men who had not been hurt in battle, but were malnourished and feverish. Many of the ships logs had recorded DD (Discharged Dead) against seamen’s names in the muster lists. The massive three and two deck vessels joined the smaller ships of the Channel Fleet, which were already in the crowded anchorage sheltering from the weather. 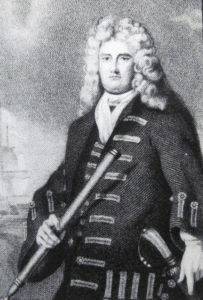 As the wind increased, it was clear to the admiral that his larger ships needed more protection. Their towering hulls would catch the blustery weather and making tides, which would cause the ships to drag anchor. Sir Cloudesley Shovell ordered these vessels to up-anchor and proceed to the River Medway for their own protection due to the inclement elements. He left his smaller third rate and one second rate men-of-war under the control of Vice-Admiral Sir Basil Beaumont, who was commander of the Channel Fleet already in the Downs.

Within the week gales were occurring continuously and the anchorage became full of merchant as well as Queen Anne’s naval vessels. On the night of 26th November, strong spring tides and an increase of wind to storm force alerted the captains to what a precarious position they were in. Some let out more anchor cable and others dropped a second anchor to ride out the storm. In the early hours of the morning the wind increased to hurricane force and, at times, blew over a hundred mile per hour.

With a new moon, the Downs was in total darkness and indistinct shapes of ships could be seen dragging their anchor and entangling with other vessels. The wind was so strong that the officers’ orders could not be heard or carried out – although in the circumstances, there was little they could do against the vehemence of the elements. Cold spray was lashing the men and chilling them to their inner core as they struggled against the wind. Masts were cut away to try and steady the ships along with the ropes and spars that were ensnarling each other. Whilst this was happening some of the naval men-of-war were slowly furrowing the seabed with their anchors towards the perilous Goodwin Sands.

As daybreak reluctantly broke on the 27th November, the wind was still blowing storm force, and from the town of Deal, observers on the wave tossed foreshore could see the devastation in the anchorage. All of the one hundred and more ships were in disarray, many with masts gone and complete chaos on board. Four wrecks that were displaying signals of distress were seen on the Goodwins and their size showed that they were British naval ships.

Thomas Warren, future mayor and in charge of the Naval Yard at Deal, consulted with the boatmen how a rescue could be attempted. They all agreed that the sea was too rough to launch a boat from the beach and it would be an impossible task under those conditions.  All that day the townsfolk watched with sympathy the plight of the men on the disappearing stranded warships as the tide made once more. An attempt by the large man-of-war, Prince George, to launch a long boat to save the shipwrecked men was futile as they could get nowhere near the wrecks. The survivors on the 70 gun Stirling Castle, Restoration, Northumberland and Mary had to cling-on to their battered remains and endure another night under those appalling circumstances.

The following morning three of the wrecks had disappeared and only the Stirling Castle could be seen still showing above the waves. Her anchor had dragged to an area called the Bunt Head, in the shoal water surrounding the Goodwins. Tides in the shoal water were not as strong and had been her salvation against the fury of the storm. With the wind decreased, boats managed to get afloat and save the lives of 70 seamen from the wreck, leaving on board the bodies of many others who had died of exposure and hypothermia. The Goodwins eventually consumed the vessel – along with its dead.

Note: The wreck of the Stirling Castle was discovered emerging from the Goodwin Sands in 1979 where many artifacts were recovered by divers.