On Saturday January 12, 1907, the East Kent Mercury newspaper printed a lengthy article following the death of Henry T. Marsh. The article described him as an aged boatman, who had been an old survivor of the older generation of Deal boatmen, more commonly known to his friends “Black Harry”. Having lived to the rope old age of 92 years, Henry was considered a Hero of the Goodwin Sands, having assisted with volunteering for many years as a crew member on the North Deal lifeboat.

During his involvement with the North Deal lifeboat, Henry Marsh was part of the lifeboat crew during an incident that occurred on October 14, 1881. With a west gale blowing most of the day many ships were choosing to anchor in the Downs off of Deal, while others were running back down the Channel. One of the vessels sailing through the Downs was the Ganges, which was hoping to seek shelter with thirty-five crew on board. At the point of the Ganges attempting to drop anchor, but the sails of this fully-rigged ship became torn apart in the increasing winds. A powerful tug boat was soon sent to assist the vessel, but the Ganges dragged the tug astern towards the Goodwin Sands, before the 15 inch hawser snapped, leaving the Ganges to drift while the tug chose to return to shore. The crew on the Ganges rapidly burned flares and blue lights to summon further help while she continued to drift helplessly nearer to the treacherous Goodwin Sands.

As a result the distress signals were soon seen by boatmen on Deal beach and the North Deal lifeboat ‘Mary Somerville’ was launched with Henry Marsh on board. The Ganges had struck the middle part of the Goodwin Sands and seas were breaking mast high over her. The lifeboat dropped anchor and veered towards the stricken Ganges, and after several attempts eventually managed to get almost alongside the ship in the heavy seas. One of the lifeboat, Henry Marsh, volunteered to jump into the sea with a line around his waist, and be dragged through the breaking sea. Sixty-five year Henry went ahead with fastening a line around his waist and shouted ‘Haul away!’ Henry fought and struggled through the continuing heavy surf, before he reached the stranded ship’s side. Everyone on board the lifeboat vividly remembered the deafening noise that was made by the sails after they had been ripped to shreds in the wind. 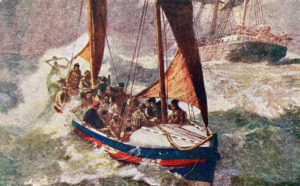 The North Deal lifeboat managed to get lifelines thrown over to the Ganges and rescued seventeen members of the crew, including the Captain mates and apprentices, while twelve others were taken aboard the Ramsgate lifeboat, which had also arrived to assist. Unfortunately several of the crew of the Ganges had been lost while attempting to make their way in a small lifeboat from the ship. By two o’clock in the morning the lifeboat took up sail and headed for home on Deal beach, which lay seven miles away to windward in the continuing heavy seas and gale force winds.

This hadn’t been the first occasion that Henry had entered thewater to help save those stranded on the Goodwin Sands. Henry recalled in an interview that “I slipped a a ship in the Downs in a gale of wind, and took her into Ramsgate, and close to the Brake Sand we came across a buoy  adrift of its moorings, so we lugger-men said we’d have that buoy the next day. Morning came, and we got the lugger under way out of Ramsgate, and kept a keen eye on the Goodwin Sands. ‘That’s not the buoy is it?’ said one ‘No it ain’t, its moving’, said another. As we got closer we saw a knot of men, and we said, We’ll have them instead of the buoy.” It had been difficult to get close to the Goodwin Sands at the location the men were found, and the lugger crew chose to travel further north where there was a higher level to recover the men. Henry continued “They were glad to see us, though there was deep water between us and them, so I says, being a young man at that time, ‘Give me the lead line and take a turn round me. And I jumped over board, and after a bit I got bottom and then I got ashore and hauled our light anchor onto the sands.

The men had been making a raft when they saw us coming, out of the remains of their vessel, and were as haggard as wolves and out like, and crusted with salt, but we soon rigged up lines, and got them aboard us for home, and then they cheered up a bit, and told us their story.”

A young Henry Marsh was mentioned in the book ‘Heroes of the Goodwin Sands’ regarding an incident that occurred when a schooner was seen to have struck the Goodwin Sands. However, the incident occurred in 1840, prior to the availability of any lifeboats being stationed along the Kent coast. As a result the young man joined several other boatmen in a Deal beach lugger and went to the aid of the schooner and rescued all those on board. The incident is more poignant since the young man was getting married that day. That young man was Henry Marsh.