The Deal, Walmer & Sandwich Mercury newspaper reported on the death of former Kingsdown lifeboat Coxswain, James Laming, who had been born and lived in Kingsdown all of his life. He was described as a native of the village of Kingsdown and came from a family that had long been connected with the village. He had been educated at Ringwould School and on leaving he quickly began working with seafaring.

While not undertaking his volunteer role for the Kingsdown lifeboat, James Laming was a Kingsdown boatman and channel pilot. One of his most perilous experiences had been when he had a narrow escape from drowning while he was on the barque ‘Childwall’ of Liverpool, which had been on passage from Iquique to Antwerp. On January 2, 1892, the vessel was run into and cut in nearly cut in two by the steamer ‘Noordland’, near the Wellington light vessel, which was situated 13 miles from Flushing.

The vessel rapidly sunk within two minutes of the collision, resulting in  fifteen men being drowned. However, James Laming was one of eight men, who managed to climb the mizzen rigging on stricken the vessel, and after four hours of being lashed to the mast on that bitterly cold night the men were all saved by the passing Harwich steamer ‘Ipswich’ with the survivors being taken onboard the vessels lifeboat. 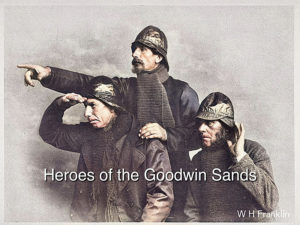 Coxswain James Laming was one of the three Coxswains that were depicted on the book ‘Heroes of the Goodwin Sands’ that had been written by the Reverend Tomas Stanley Treanor. The front cover of the book shows James Laming stood with the Coxswains of the other local lifeboats, Coxswain Richard Roberts of the North Deal lifeboat, and Coxswain John Makins of the Walmer lifeboat. The original photograph of the three local lifeboat Coxswains had been taken by the Deal photographer W.H. Franklin, prior to being used as the from cover image for the book.

The Reverend Stanley Treanor once referred to Coxswain Laming as “a man straight as a line, a man of undoubted course and pure words.” One of the many gallant deeds that Coxswain Laming was involved with was the rescue of the daughter of the captain of the ‘Glendura’ that had been wrecked off Kingsdown, when he lunged into the sea and brought her ashore. James Laming had been a volunteer member at Kingsdown lifeboat station for no less than 41 years, and for many of those year had served as Second Coxswain under the first Kingsdown lifeboat Coxswain, Jarvist Arnold. Following the retirement of Coxswain Jarvist Anold, James Laming then became Coxswain and served in that position for 27 years, and was able to assist with the saving of 227 lives. On three occasions he received certificate son honour for services rendered, with one occasion being the rescue in connection with the barque ‘Mersey’ on December 28, 1901. Both the Kingsdown lifeboat and Walmer lifeboat launched to the aid of the four-masted iron ship that had been driven onto the Goodwin Sands, saving her crew of fourteen people.

Coxswain James Laming’s retirement in 1910 was attributed to his gradual failing health, due to the exposure in rough weather. On November 14, 1907, he was presented with a silver medal from the Royal National Lifeboat Institution for his record of gallant services to the ship ‘Glendora’ and the barque ‘Hony Sverne’ (1870), the barque ‘Richard and Harriet’ (1871), the s.s. ‘Sorrento’ (1872), the brig ‘Dillwyn’ (1877), the brig ‘Breeze’ (1884), the steamer ‘Dolphin’ (1885), the schooner ‘Excel’ (1897), the brig ‘Unione’ (1898), the s.s. ‘Carlotta’ (1900), and the brig ‘Mersey’ (1901). This became the last occasion on which a medal awarded on retirement. The framed certificate that accompanied the medal was signed by Sir Edward Birkbeck, Chairman, and Mr. Charles Dibden, Secretary of the Institution. On November 12, 1910, he then became the recipient of a purse of money and a framed illuminated address, bearing the names of 135 subscribers.

Coxswain James laming died at the age of 70 years on 3rd August 1912. His funeral and burial were held at the Kingsdown Church, with Reverend Reginald Jones reading a brief, but touching reference by saying “There lies here all that was mortal of one of the ‘Heroes of the Goodwin Sands’. He was a man who always tried to do his duty. Guiding the earthly lifeboat, he and his gallant comrades were instrumental in saying hundreds of lives.”