Death affects everybody in different ways. Sadness consumes the mind along with the loss. Nevertheless, when death could be avoided, the mind is not only filled with melancholy but also frustration and bitterness. Such were the feelings of the Deal lifeboat coxswain and his crew on the night of 1st November, 1919.

As the North Goodwin, East Goodwin and Gull lightships started to fire their guns and rockets, on the beach preparations were going ahead to launch the Deal lifeboat, Charles Dibden. An east-north-east gale had been raging from the day before and the seas were endlessly pounding upon the beach. At a quarter to 11 in the evening, the lifeboat was let go from her slip chain and she sped down the shingled beach. The incoming waves halted her momentum for a mere second, at the same time as the crew hoisted her sails.  The coxswain William Adams dropped the rudder home and the base of the iron pintles crashed against the gudgeons which were attached to the stern post. Slowly and laboriously the Charles Dibden clawed her way against the gale and towards the Goodwins . 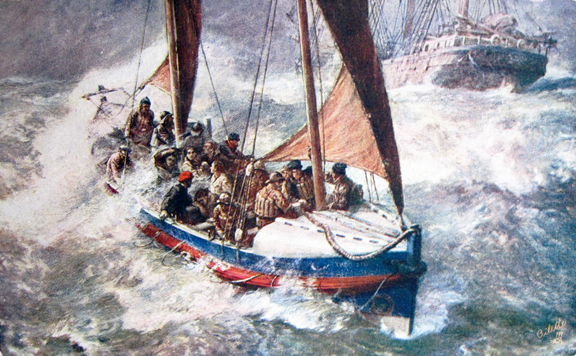 With all three lightships firing signals coxswain Adams decided to head for the nearest one first, to ascertain where the casualty was. After three hours of beating against the wind he gradually closed in on the Gull light vessel. Before they reached the ship, his crew alerted him that they could see a schooner, awash, on the starboard beam. With seas breaking over the bow, the drenched men manoeuvred the lifeboat up tide to the wreck. With the wind on their port quarter, the coxswain ordered the kedge anchor to be let go.

Before they could haul down their mainsail and veer out the anchor cable, a large steamer appeared on their bow, heading directly at them!

Will Adams could not believe his eyes. The ship, being empty of cargo and high in the water, looked enormous. Adams’ reason raced ahead, trying to solve the situation that he and his crew found themselves in. They were being tossed about in the confused sea, which the flood tide was creating against the wind; nevertheless, the lifeboat was now in a position to make the save. Was he to let out the cable and ignore the ship, which was still approaching on a collision course, or get out of her way? He ordered some of the crew to ignite flares, to signal and thus attract the attention of the steamer to their predicament. The rest of the crew were shouting as loud as they could, however, the roar of the gale reduced their voices to mere whispers.

In the flare’s incandescence the apprehensive crews’ faces glowed as they looked first towards the approaching menace and then at the shipwreck. From the light they could see six pitiful survivors clinging to the schooner’s rigging and another two holding on to part of the wreck.

At the last moment the lifeboat coxswain took avoiding action. He shouted curses as the ship narrowly missed them and continued on her way. He almost expected, and secretly hoped, that she would strike the Sands at any moment. The unidentified ship, being light in the water, survived that ordeal.

Again, with difficulty, Adams positioned the Charles Dibden up tide from the wreck. With the anchor down, they let the lifeboat’s main cable slowly inch its way out from around the sampson post. The coxswain positioned the rudder, sheering the little craft closer to the casualty. 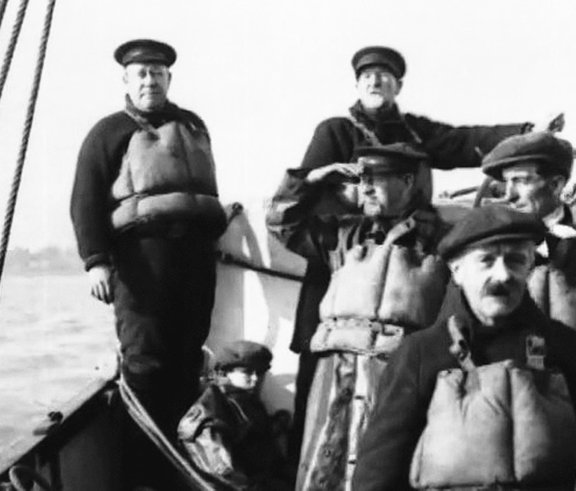 Adams was calm now – and he and his crew were working as a team. Although the unnecessary delay had unnerved them, they were about to rescue the half dead people that they had fought to save. Moments prior to the first poor souls being helped aboard, a wave, larger than any of them had ever witnessed before, hit the shipwreck. The sea crashed against the wrecks side, bodily skewing the 157 ton vessel beam onto them – and briefly displaying her salt encrusted name plate. The horrified lifeboat crew mouthed the letters into a word, TOOGO.

The wave shook the ship as if it was a toy. All of the people in the rigging were catapulted off and into the maelstrom, which surrounded the wreck – but unfortunately, away from the waiting lifeboat. With the mountainous wave, the crippled schooner’s decks were awash and the two people clinging to the mast vanished overboard. Adams’ immediate reflex was to cut the anchor rope and set the main and mizzen sail. However, their exertions were instantly halted when they heard the piecing scream of a woman. The shriek was distinctive above the roar of the sea – and would haunt these poor men for years to come. It was the death-scream of the captain’s wife as her terrifying ordeal came to an end. The startled crew looked upon their coxswain for guidance. Although he was duly affected, by the woman’s dying cry, he could not show his men any sign of weakness and shouted to them to carry on about their duties.