As the North Deal lifeboat cleared the wreck of the schooner Toogo, the coxswain told his men to keep a good lookout for those struggling in the sea. One of his crewmen thought he could hear cries close to the lurching Charles Dibden, and, with mounting hope, they peered through the darkness. Nothing was seen, apart from wreckage, and Adams let his vessel drift with the flotsam, still hoping he would find some survivors. 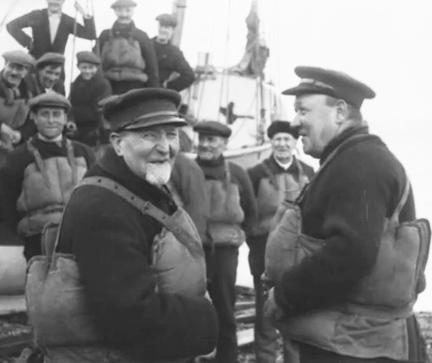 When daybreak started to loom from the east his men were exhausted and almost delirious with fatigue. It was only their conscience and sorrow which kept them uncomplaining and vigilant. In the first light they spied two men clinging desperately to an upturned dingy a fair distance from the lifeboat. With the waves just as violent they made six attempts to reach them. As they were about to make more adjustment to their sails, and another attempt, a massive curling sea fell into the Charles Dibden.

The lifeboat was equipped to shed the load of water by way of her self-draining and non-return valves set into her deck. However, it had taken the crew unawares and coxswain Adams was thrown against one of the air boxes, which were situated against the stern bulkhead. The brutality of this assault drove the man’s wind from his body. Before he could feel the hurt, he was nearly suffocated with the water and several crew members, who had also fallen on top of him.

His strength was starting to fail him and his back was in pain. The four men who had landed on him were lying on the deck with injuries – it was only his courage that made him carry on. He was now glad that he had had the foresight to take on two extra crewmen on this horrendous trip.

The two shipwrecked men were eventually pulled out of the water – more dead than alive. The lifeboat crew sympathetically administered first aid but had difficulty in conversing with the Estonian sailors. With a swift scan of the sea around them, Bill Adams called to his tired, but thankful men, that it was time to return to the lifeboat station – and get proper care for the survivors and injured crew.

The lifeboat surged heavily in the following seas, heeling and corkscrewing unpleasantly, nevertheless they were making quick progress home when Adams saw a steam ship requesting their attention. He reluctantly hove to and the captain of the steamer, Woolpack, spoke to him through a loud hailer. He explained that they had rescued another man from the sea hours earlier. Miraculously it was a further survivor from the wreck of the Toogo. Wearily Adams reasoned with the master that, in these sea conditions, it would be safer to leave the man aboard. The ship’s captain agreed, and the relieved lifeboat coxswain again headed his craft for land.

As the Charles Dibden hit the beach, a wave cascaded over her stern. Adams automatically ducked as the water washed over him and the men. He flinched and grimaced as a pain seared through his back. Whilst the beach-crew was helping him out of his sturdy craft he was met by the anxious looking lifeboat secretary, John Prior. The secretary’s facial expression was of concern as he asked Adams to launch again to another two vessels that had been spied in distress on the Goodwins. The request that Mr Prior made to Adams was, with regret, too much. The lifeboat coxswain was escorted to a doctor, whose authority he had to obey, and was put straight

to bed. Another coxswain and fresh crew launched shortly after to another ordeal in those terrible conditions to attempt to save lives from the stricken barges Corinthian and Glenavon.

As Adams recovered from his back injuries, the screams of the Estonian skipper’s wife would always be there in his nightmares. He often wondered if it would have been different if the oncoming steamer had not delayed the rescue from the Toogo. Also he felt, that the ship’s master no doubt slept well and was oblivious of the loss of life he had caused by his heedless action.

The following year, at Deal town hall, there was a presentation to William Adams from Admiral Sir Reginald Henderson and his wife Lady Henderson. On behalf of the Lifeboat Institution they awarded a Third Service Clasp which was to be added to Adams’ silver medal. The Estonian Red Cross honoured the coxswain and his crew medals and certificates of thanks for saving the lives of their countrymen.

‘Bonnie’ Adams would continue as lifeboat coxswain until 1920, when after a thirteen years service with the Institution, he retired at the age of 70. He had served almost fifty years on the North Deal Lifeboat as crew and skipper, and passed away on 23rd October, 1926, after a very eventful life.