Many years ago a television company was filming a pilot programme about a Goodwin Sands shipwreck, the U-16, in our local maritime museum. Although one of the presenters of this TV instalment was the popular actor Mark Wingett (ex The Bill and Eastenders), there was a quite unassuming gentleman who, in my eyes, was the star of the episode. His name was John Cook, and it was his father who had lost his life in a little known episode of World War II. 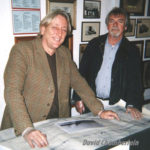 John’s father, John Thomas Cook RNR, was the asdic operator aboard the armed trawler Cayton Wyke, and it was this vessel that helped sink the U-16 close to the South Goodwins. From this action, he received a Distinguished Service Medal. John Thomas unfortunately lost his life eleven months later when the Cayton Wyke was pounced upon, and sunk by the E-boat S36.

The story of the sinking of the U-16 in 1939 seems to be full of twists and turns. When I was researching about it for my book Saga of the Goodwins, I seemed to come across different versions at every turn of the page.

Even the East Kent Mercury printed a story at the time, where Deal Boatmen had found the wreck high and dry on the Goodwins – with 50 dead Germans aboard. This to me was puzzling, as that class of U-boat only carried a crew of 28.

What became of the dead crew? I found out that her captain had been washed up on a French shore and buried in a German war grave at Calais. This then caused me another enigma, as five of the crew are buried at Cannock Chase in England.

There was another question that needed answering, why was the U-16 in Trinity Bay and the Downs? Kapitanleutnant Horst Wellner had successfully laid a mine field off Dungerness, therefore, why risk his submarine, or create an international incident in amongst the anchored neutral ships awaiting the Contraband Control in the Downs?

Without doubt the U-16 was stranded on top of the Goodwin Sands. In all probability after she had been attacked and damaged by the 82 depth charges, which were dropped by the anti-submarine vessels. But how long did she lay there? Presumably long enough for the Royal Navy to investigate the shattered contents inside her hull. If that was the case, then why did they not try and tow her off? It would have been a war trophy and great for moral boosting propaganda.

Curiously the Navy, in the guise of the Hydrographical department, placed her remains in a position, on the Admiralty chart, alongside the wreck of the Cayton Wyke. Recently divers have proved this to be false.

As it can be seen there are mysteries that surrounded the sinking of the U-16 that, hopefully, are explained in my new book.

John Cook admitted that he was only three years old at the time of his father’s death and does not recollect him, nevertheless, there is still sadness at the loss of a parent.