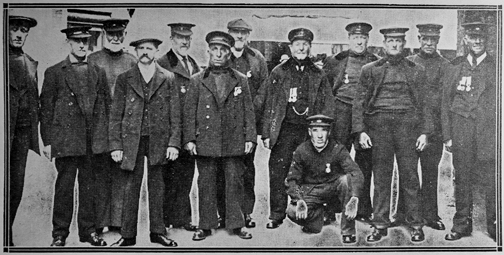 One of the most outstanding incidents and rescues attended to by the North Deal lifeboat occurred a century ago in January 1919, with the rescue of the crew of the American Government steamer ‘Piave’, of New Jersey, which had been on passage from New York to Rotterdam.

The 6,000 tons vessel, which had a crew of 96 had gone aground on the Goodwin Sands on January 29, 1919, and initial attempts were made to tow the vessel off the sands, but to no avail. The North Deal lifeboat ‘Charles Dibden’ was launched to the aid of the stranded vessel and stood by the ship on January 31, with the crew helping to jettison the cargo of foodstuffs ,mostly flour, including bacon, lard and other supplies that were needed on the continent.

Without a pilot on board the ‘Piave’ had ran aground on the north west edge of the Goodwin Sands at the top of high water during the evening of Wednesday 29 January. Due to the ship being well lit she was promptly seen by the Gull lightvessel, which in turn fired dress rockets to summon the launch of the North Deal lifeboat. Coxswain William Adams quickly summoned his volunteer lifeboat crew and launched the lifeboat at 10.30 p.m. and went off in the the direction of the Piave, but had to divert their route due to the conditions of wind and tide, before finally reaching the ship at around midnight.

The lifeboat was able to drop anchor and veer alongside the Piave, which by then was firmly aground broadside of the land. A rope was passed and a later thrown down before three of the lifeboatmen went on board. The lifeboatmen were informed that the Captain of the vessel was asleep in his bunk and should not be work until 7.30 the next morning. A Dover tug, with Captain Irons the harbour master on board, and spoke with Captain H. L. Mortensue. He agreed for the lifeboat to standby and get the hausers aboard for the tugs. Th first attempt to reflect the ship went ahead the following morning, but was unsuccessful and the design was made to jettison the cargo of 1,000 bags of flour, numerous casks of lard, bacon and other foods stuffs being dumped into the sea to hep lighten the vessel for refloating.

A further attempt was made to refloat the ship by six powerful tugs, but this again proved unsuccessful. More cargo was jettisoned, along with 1,500 tons of oil being pumped into the sea on the Friday. A fourth attempt was made on the vessel before cracking noises were then heard sounding like thunder. The ship soon rolled to starboard before righting herself, then lurched heavily back again on the rising tide and worsening weather conditions. The ship then collapsed and parted, leading to a scramble to the decks of those on board at around 5.30 p.m., with the ‘Piave’ actually became a wreck when she broke her back on the Goodwin Sands, and eventually fell to the side. The ship had been lit by electric light until this point and the once the electric light failed pocket torches and lifeboat flares were required to see in the complete darkness, while a heavy sea and snow squalls were developing.

A bitter wind was increasing and lowering the temperature as a frost turned the spindrift into icicles. Twenty-nine of the ship’s crew were removed onto the ‘Charles Dibden’ for safety, while the ship’s remainder crew 96 crew, with Captain Mortensue, Captain Irons and a Trinity Pilot all being taken off. Some of the American sailors had jumped into the lifeboat while others slid down ropes and dropped into the sea. They were rapidly hauled out of the surf and into the lifeboat. Others in the crew manned two of the ship’s lifeboats, but they quickly filled with men, but in the hurry and confusion the tackle got snagged and both boats were left suspended from the davits, before throwing men into the surf. They were assisted into the lifeboat and all hands saved.

The tug ‘Champion’ and the Ramsgate lifeboat were also assisting with the rescues. As the lifeboat made her way back to shore with the rescued crew of the ‘Piave’ she was caught in a whirlpool, which lead to her crew losing control of her for a almost half an hour, but were eventually able  to reach safely ashore.

For their efforts during the incident and the rescue of 29 of the ship’s crew a special presentation was made at Deal Town Hall on July 3, 1920, with Captain W. R. Sexton, U.S. Navy, Naval Attache to the American Embassy, on behalf of his Government, honouring the crew of the North Deal lifeboat. In addition to monetary awards by the American Government, a valuable gold watch an chain were presented to Coxswain William Adams, and a gold medal to each member of the lifeboat’s crew – William Adams (Coxswain), Thomas Adams, William Wells, Thomas Adams, Frank Adams, Thomas Cribben, John Webb, Frank Budd, Richard Riley, Robert Holbourne, Samuel Trice, Walter Redsull, Matthew Hoile, Alfred Jordan, and Ernest May.