The death of former Walmer lifeboat Coxswain, John Mackins, was broadcast with an obituary in the Shipping Gazette and Lloyd’s List printed on Monday January 12, 1907. The obituary stated for John Mackins “On Saturday was interred at Deal Cemetery one who is undoubtedly entitled to a place on the roll of heroes.” An article appeared in the Deal, Walmer & Sandwich Mercury newspaper that gave details of his death. Coxswain John Mackins died at the age of sixty-six years, while in Leytonstone on January 11, 1907.

Coxswain John Mackins funeral was attend by the Reverend Thomas Stanley Treanor, Honorable Secretary of the Goodwin Sands Branch of the Lifeboat Institution and sent a wreath. His coffin was covered with the union flag , and among those also present at his funeral were fellow Coxswain Richard Roberts of the North Deal lifeboat, and Coxswain James laming of the Kingsdown lifeboat. The then present Walmer lifeboat coxswain, Harry Parker, was also present. The other volunteer crew members of the Walmer lifeboat had planned on attending the funeral service, but were absent and unable to pay their last respects due to the Walmer lifeboat having launched to the P&O liner Moldavia beaconing stranded on the Goodwin Sands.

One of the most notable rescues that Coxswain John Mackins was involved with was the rescue and saving of thirty-five lives from the 1,800 tons steamer Carlotta, of Spezzia, had run aground on the southern section of the Goodwin Sands on the morning of October 9, 1900. Both the Walmer and Kingsdown lifeboats were launched at 1.45 a.m. to the Carlotta, which was carrying a cargo of barley and rape-seed. With the assistance of some local luggers the crews of the lifeboats attempted to jettison the stranded vessel’s cargo along with the crew on the Carlotta. However, the following evening the weather conditions worsened, resulting in the Carlotta breaking in two, with both lifeboats rescuing everyone on board.

During his years of service volunteering at Walmer lifeboat station he is credited with saving no less than 120 lives at sea. The Central Committee of the Lifeboat Institution  recognised his efforts with the Royal National Lifeboat Institution by passing a resolution that was signed by the Price of Wales, who was the President, along with Sire Edward Birbeck as Chairman, and Mr. Charles Dibden as Secretary. The resolution stated “Resolved that the best thanks of the Royal National Lifeboat Institution be presented to Mr. J. Mackins, coxswain of the Civil Service No.4, Lower Walmer lifeboat, in recognition of his long continued services in saving life from shipwreck, and especially on the occasion of the rescue of the crew of the barque Mersey, in a gale of wind, in a very rough sea and cold weather, on December 28, 1901.

” The four-masted iron ship Mersey was driven onto the Goodwin Sands with fourteen crew, who were saved by both the Walmer lifeboat and Kingsdown lifeboats. In a severe south-westerly gale the Mersey, of Grimsted, ran aground while on passage from the River Plate to Goole, laden with 1,400 tons of timber. Tugs had initially been sent to try assist the Mersey, but were unable to help due to a worsening sea state. At 6 a.m. the Kingsdown lifeboat was launched, followed an hour later by the Walmer lifeboat, with Coxswain John Mackins at the helm. On the arrival of both lifeboats the Mersey was already breaking up and her masts lost overboard. Kingsdown lifeboat rescued seven crew and the Walmer lifeboat also saved seven of the crew. For their gallant efforts both Coxswains were awarded the Thanks on Vellum by the Royal National Lifeboat Institution.

Coxswain John Mackins was one of the three Coxswains that were depicted on the front cover of the book ‘Heroes of the Goodwin Sands’ that had been written by the Reverend Thomas Stanley Treanor in 1892. The front cover of the book shows John Mackins stood with the coxswains of the other two local lifeboats, Coxswain Richard Roberts of the North Deal lifeboat, and Coxswain James Laming of the Kingsdown lifeboat. The original photograph of the three local lifeboat coxswains had been taken by the Deal photographer W.H. Franklin, prior to being used as the from cover image for the book, and was later used as a large image for a calendar.

Coxswain John Mackins is always recognised as the Coxswain shown on the right of the illustration and photograph shown holding a hand to his ear listening for the sound of a distress flare. For many years, Coxswain John Mackins had been the landlord of The Stag public house from as early as 1862, which is still located along The Strand, just a short distance from Walmer lifeboat station. During his time as landlord at The Stag he had spent three months in prison for his part in bribing electors in the interest of votes for Conservatives during the 1880 by-election. 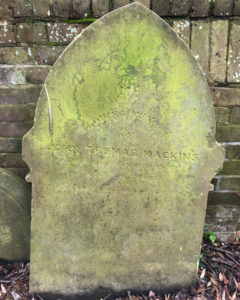