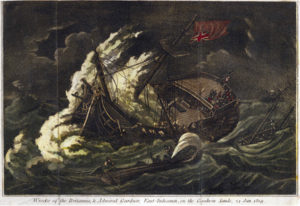 The Admiral Gardner was an 813-ton English East Indiaman built on the River Thames and launched in 1797.   At 415 feet long and 36 feet wide, she had three decks, 23 gun ports, three masts and was built from oak and teak.  She was named after a famous naval officer of the time, Admiral Alan, 1st Baron Gardner who later became an MP.

After undertaking five passages for the East India Company (EIC) she embarked on her sixth from London on 25th January 1809.

Once out of the Thames Estuary, the Admiral Gardner was forced to anchor up as she was becalmed in what would prove to be a lull before the storm. As the gale blew up, the ship broke free of her moorings and was driven onto the treacherous Goodwin Sands.

Her Master, Captain William Eastfield later recounted the story of her foundering on the Sands; nearly everyone on board survived thanks to the heroic efforts of the Deal boatmen but all of her considerable amount of cargo was lost.

Her cargo on this sixth voyage included 46 tons of X and XX cash coins newly struck by Matthew Boulton of Birmingham’s Soho Mint and worth a reported £21,579, a considerable sum in those days.  They had been packed in wax for the long journey to India where they were intended for use at the numerous EIC trading posts.

In 1976 EIC cash coins appeared in sand dredged up by Dover Harbour Board and were deposited in the foundations of Dover’s Eastern docks. It was suspected the coins came from the Admiral Gardner but she was not positively identified until 1983 following reports of fishermens’ nets snagging on the seabed.  Apparently, once the presence of these coins in the landfill became known, the whole area had to be fenced off and policed against metal detectorists determined to unearth some of this famous 19th century treasure.

There were suggestions that the EIC coins came from the Admiral Gardne’sr sister ship Britannia, which foundered on the Goodwin Sands on the same night.  However, it transpired that Britannia was only carrying silver coins and to this day her location remains a mystery.

The first divers who went down to investigate came across a marvellous sight of the exposed ribs of the ship, coins spilling out from the barrels in which they had been packed, cannon balls, anchors, iron bars and copper ingots.  Once the Admiral Gardner was designated a Protected Wreck in 1985, many coins were retrieved under licence, including the complete contents of one barrel reportedly containing 28,000 pieces that was brought to the surface by Richard Larn OBE.

The dynamism of the Goodwin Sands is a well-known fact.  When she was eventually found in 1985, the Admiral Gardner was lying visible in about 45 feet of water but a survey in 2017 found that there was then no water above the sand at her location, meaning that she is currently completely buried under the sandbank.

This burial is a good thing as the sand acts as a preservative.  However, the wreck lies very close to Dover Harbour Board’s new proposed dredge zone and there is concern in come quarters that she may become uncovered in future years, as the sands move to fill in the trenches left by the dredging.  Regular monitoring will be required to ensure her continued preservation.

Coins from the wreck are still in circulation today and are often sold on auction sites such as ebay.